Lessons from celebrities on an iceberg 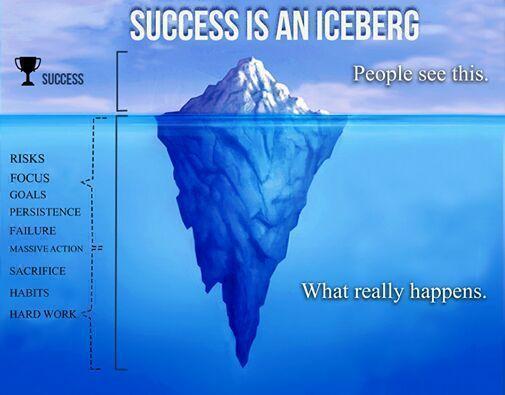 The iceberg of success is a wonderful image to help motivate entrepreneurs. It is a simple snapshot of the enormous amount of behind-the-scenes (or below-the-waterline) work that is absolutely necessary if you’re going to live the life of success others may perceive you to enjoy.

For those who haven’t seen the iceberg (which could be a Titanic mistake to make), one glance is enough to convey the key message: a successful entrepreneur relies on a multitude of unseen activities, without which they are well and truly sunk.

A number of highly successful individuals have had some very useful things to say about those activities over the years, some of which we’ve collected here for your consideration and comments.

Mark Zuckerberg summed things up nicely, way back in 2011. “The biggest risk is not taking any risk,” said the Facebook founder while giving a talk to the Y Combinator’s Startup School at Stanford University in California. “In a world that’s changing really quickly, the only strategy that is guaranteed to fail is not taking risks.”

Steve Jobs was a big fan of focus, and I think we can all agree he was something of a business success story. The late, great founder of Apple, offered his own thoughts on focus in a 1998 interview with the magazine Business Week. “That’s been one of my mantras: focus and simplicity,” he said. “Simple can be harder than complex. You have to work hard to get your thinking clean to make it simple. But it’s worth it in the end because once you get there, you can move mountains.”

Richard Branson knows a few things about entrepreneurship and how to get ahead in business. “I set my goals and stick to them,” wrote Branson in his book Screw It, Let’s Do It: Lessons in Life and Business. “Success is more than just luck. You have to believe in yourself and make it happen.”

Churchillian is an honest-to-goodness adjective, so it pays to take business and leadership tips from the former British Prime Minister Winston Churchill. When it comes to the topic of persistence, he said: “Continuous effort – not strength or intelligence – is the key to unlocking our potential.” He also explained that “success is stumbling from failure to failure with no loss of enthusiasm”.

Author J.K. Rowling has experienced failure. In the years before Harry Potter became a multi-billion pound entertainment smash, she struggled with clinical depression and even contemplated suicide. “It is impossible to live without failing at something, unless you live so cautiously that you might as well not have lived at all, in which case you have failed by default.”

“If you want swashbuckling action in your life, become an entrepreneur and give it a go,” wrote Richard Branson in his book Business Stripped Bare: Adventures of a Global Entrepreneur. And Dale Carnegie – author of one of the first business self-help guides, How to Win Friends and Influence People – had this to say: “Inaction breeds doubt and fear. Action breeds confidence and courage. If you want to conquer fear, do not sit home and think about it. Go out and get busy.”

It’s not just the great business leaders who have something to say about the entrepreneurial spirit that drives successful individuals. Sporting professionals can also offer compelling advice, including this from football legend Pele: “Success is no accident. It is hard work, perseverance, learning, studying, sacrifice and most of all, love of what you are doing or learning to do.”

Stephen Covey is the author of The 7 Habits of Highly Effective People, another self-help guide that has gone down in business history. “Our character is basically a composite of our habits,” says Covey. “Because they are consistent, often unconscious patterns, they constantly, daily, express our character.”

“Men die of boredom, psychological conflict and disease,” said British media and marketing pioneer David Ogilvy, the so-called Father of Advertising. “They do not die of hard work.” Ogilvy was a Mad Men man, of course, so this naturally applies to both men and women in our more enlightened times.

And regardless of gender, who really wants to die of boredom?

What do you think of these points? We’d love to hear more – reach out to the DropJaw team via Twitter or LinkedIn or drop us a line today.